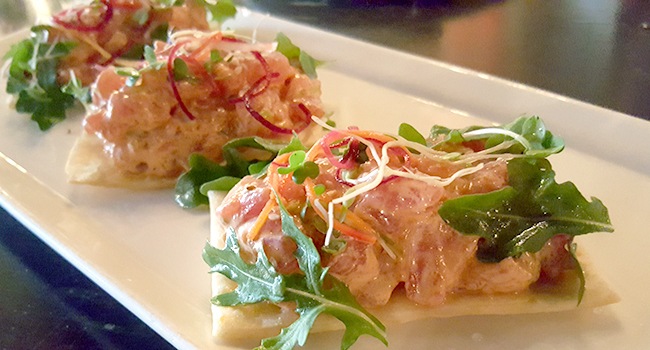 Sunnyvale is a small town that is home to many corporate titans of Silicon Valley yet most people in the world have never heard of it. On a smooth, traffic-free day it takes about 45 minutes from San Francisco proper. One would not automatically think of this little known (to the world) city as a haven of great cuisine but with the now one year old entry of The Oxford Gastropub, Sunnyvale may just be put on the map for more than technology.

With a mix of cocktail table, bar and regular table seating, Oxford displays an eclectic array of paraphernalia reminiscent of a cross between London pubs and modern Mumbai cafés. Anyone who is a world traveler knows well the deep integration between British and Indian cultures, ever present in both nations, so lest anyone be confused by Oxford’s attempts to bring this amalgamation of food, libations and ambiance to life, take a stroll through areas of London, Mumbai or Delhi and witness the original inceptions.

Service is friendly and attentive without being intrusive. Ambiance is laid back during lunch with plenty of sunlight streaming through the large front-store windows overlooking Sunnyvale’s main cobblestone, restaurant row. Dinner is more energetic with a mix of young families, couples and groups of colleagues excitedly talking about the latest startup about to IPO. Words like valuation, equity and crazy founder are par for the course here amid wafting scents of ghee brushed naan and the clinking of tall glasses filled with fascinating concoctions from the bar.

Diving into the food, Spicy Tuna Tartare (pictured above) dressed with white Miso and fresh lime juice atop a parsley cracker whose texture was pleasantly soft, making it easy to crunch into the generously portioned “bites” without the tuna falling all over the place as is typically the case with these types of finger foods. The Tartare is creamy with a touch of heat; peppered with a few sprigs of vibrant arugula. 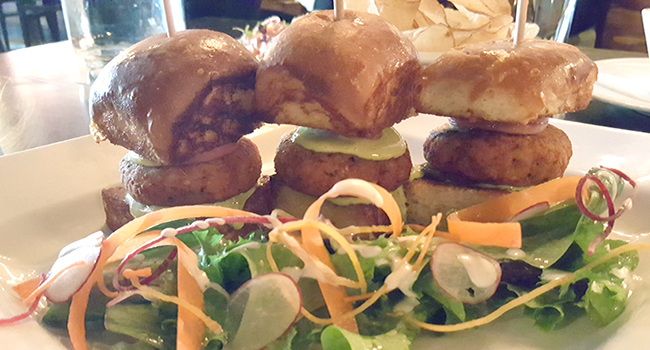 I’ve long ago lost count of the number of restaurants I’ve been to around the world and within that large number, I’ve also lost count of the number of sliders I developed a distaste for. The earliest versions of sliders I remember came about approximately ten or so years ago when they began appearing on menus at Hotel restaurants and upper scale Western restaurants. From the get go I did not understand their purpose- mini burgers that almost always came served 3 to an order which would equate pretty much to a whole regular sized burger. So were they just for cuteness? If their purpose was to create a smaller size, why couldn’t we just order 1 slider? Alas, chef friends explained they were meant to be shared among the table like tapas or dim sum.

A fine explanation that did nothing to excuse the dried out, tasteless meats and more often than not, the equally dried out, sorry excuse of bread. Suffice it to say, Sliders and I have not had a good relationship.

The Falafel Sliders appeared as predicted, 3 to an order; I eyed them with deep skepticism, especially so since these were falafel, another dish rarely made well. Much to my shock, it was love at first bite- the buns buttery soft, the falafel deeply flavorful and moist, perfectly synchronous with the piquant mint Tahini yogurt. Pickled onions and house-made chips were a wonderful accompaniment, the former lending a balanced brightness to the richness, the latter a nice crunch to an overall soft-textured dish. If you’re a slider lover, this dish is a must-have. If like me, you were ambivalent or all together antagonistic towards them, give these a shot at Oxford and you will not be disappointed. 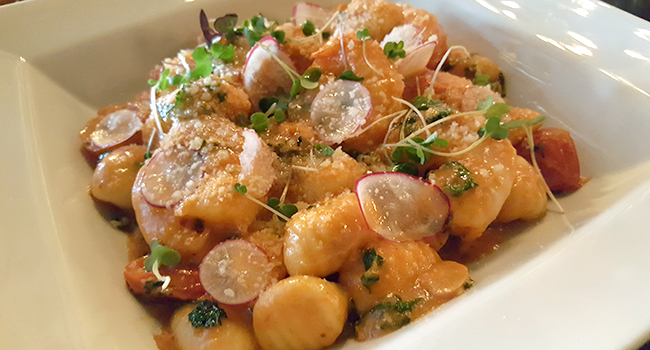 Another standout dish was the Seared Potato Gnocchi, hands down in my Top 5 all time favorite comfort dishes in the entire San Francisco Bay Area. Stewed with Cherry Tomatoes, these perfectly chewy morsels will stand up against that of any Italian restaurant stateside and satisfies Bay Areans who seem to desperately call for kale in every dish they consume (to be fair, the bits of sautéed kale were delicious). A generous sprinkling of Parmesan and micro greens sit atop this savory comfort dish I’ve now fallen in love with, so much so that I will now potentially ask my husband to get it when I’m down with a bad cold. (Let’s hope Oxford starts delivery to San Francisco). 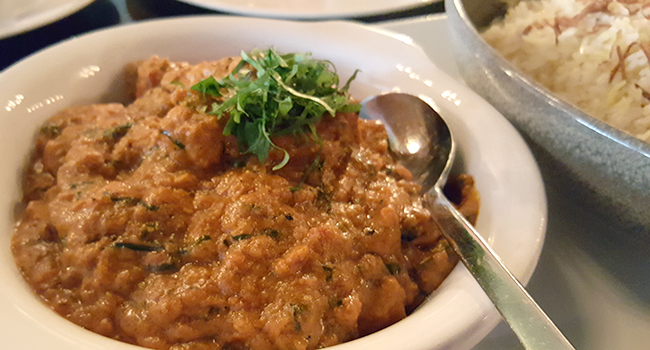 The piece de resistance was the Great Britain Chicken Tikka Masala which pays clear homage to why many world travelers are adamant that Britain goes head to head with the motherland for who has the best Indian food. (This world traveler will whole heartedly defend India as the clear winner but that is another subject for another day). At Oxford, the Chicken Tikka Masala may give a nod to Britain by name, but in aroma and most importantly flavor, this outrageously delicious dish brought me straight back to those backstreet restaurants in Mumbai, Delhi and Calcutta where restaurant owners and servers barely speak as they bring huge pots of one magical concoction after another with a huge ladle to each table of diners, expertly scooping servings onto your plate, or more often than not, your huge piece of banana leaf.

Oxford’s Chicken Tikka Masala favors a strong presence of cumin and chili pepper, much to my preference, but the key here is the gorgeous blend of their garam masala. Everyone in India from food loving grandmas at home to top chefs has a proprietary blend of garam masala (something I am still trying to perfect) and I would love to get my hands on Oxford’s blend. This dish arrives with fluffy, aromatic basmati rice, the cardomom pods fearlessly front and center, and a side of thick, soft scallion naan. For any Chicken Tikka Masala lover in the SF Bay Area, the trek to Oxford is worth the drive. 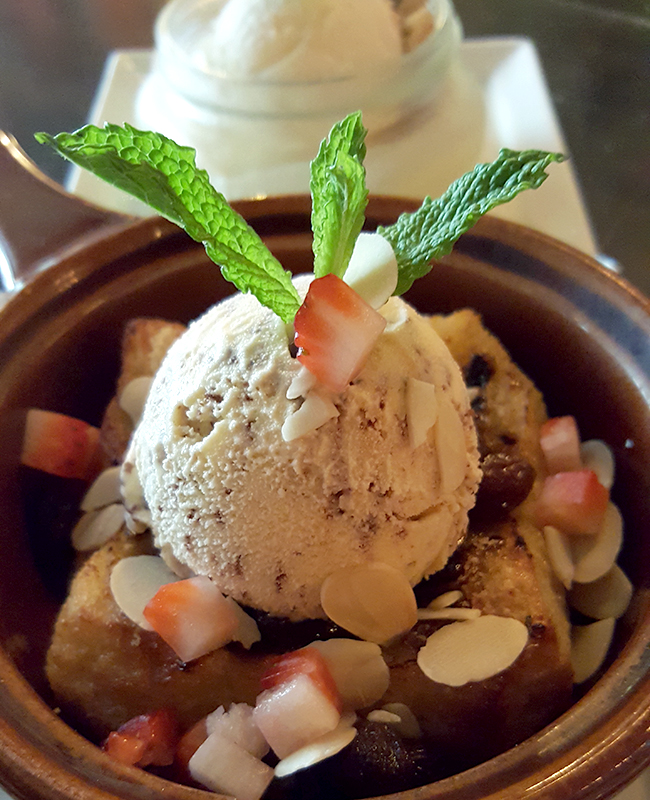 For those with a sweet tooth, Oxford Gastropub shines far above any other Indian restaurant in Northern California, with desserts that again, give a huge nod to Britain. The English Style Brioche Pudding was the best bread pudding in the entire San Francisco Bay Area, rivaling that of the only other restaurant where I will even consider ordering this dessert- Napa’s Celadon. A recurring theme throughout the meal was that Oxford keeps moist all dishes that too many other restaurants dry out beyond the line of what is edible. The Brioche Pudding displayed the same adept technique of retaining the right amount of moisture so we are not biting into sawdust neither are we eating a gloppy mess. It’s exactly what it’s supposed to be- soaked and baked bread, in this particular version, with brandied raisins, thinly sliced almonds and diced strawberries, with house-made Chocolate Flake ice cream.

For those of you seeking libations, Oxford is slowly making a name for itself with unique, sentimental cocktails such as Love in the Time of Cholera (Japanese Whisky, Rum, Lime Vanilla Elixir, Banana Extract and Blackened Cinnamon), The Cape & The Canary (Gin, Eureka Lemons, Swiss Style Yogurt, Lavender, Bitters and Sparkling Wine), and Of the Older Fashioned (Oxford Bourbon Blend, Muscovado and Bitters).

For beer lovers, there are about 30 to choose from ranging from British to German, Belgian and Scottish. And yes, you can even order Fish and Chips to go with your beer.

Oxford is attempting a courageous, bold move to bring a concept world travelers are accustomed to- melding particular elements from two cultures to create a new kind of comforting food and ambiance that those of us who consider the entire world home, find appealing- to a Bay Area that thirty years ago would have embraced this as a local watering hole but where today, it is overrun with transplants who’ve set foot outside the US once or twice and think themselves savvy foodies. As a new and ardent fan of Oxford, I have high hopes that this new kid on the restaurant block will find its loyal followers with plenty of time to sustain the harsh economic realities of running a small business in the toughest industry in the bay area.

For all of you local to Silicon Valley, I strongly urge you to head over to Oxford immediately (they’re open for lunch and dinner) and for those who live like I do, in other parts of San Francisco or bay area, get the family or group of friends together and make a night of it. The drive is worth is. For those visiting from other parts of the world, stop by if you can to get a good taste of what modern comfort food is all about. 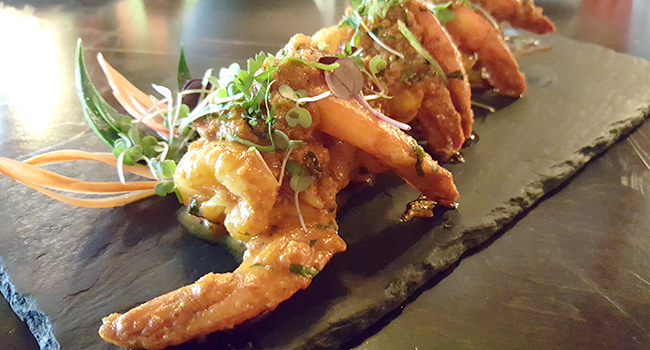 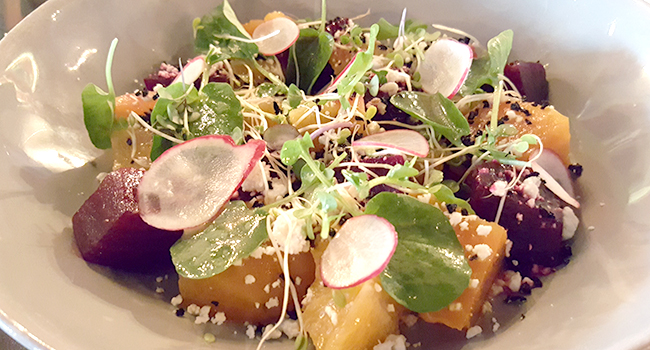 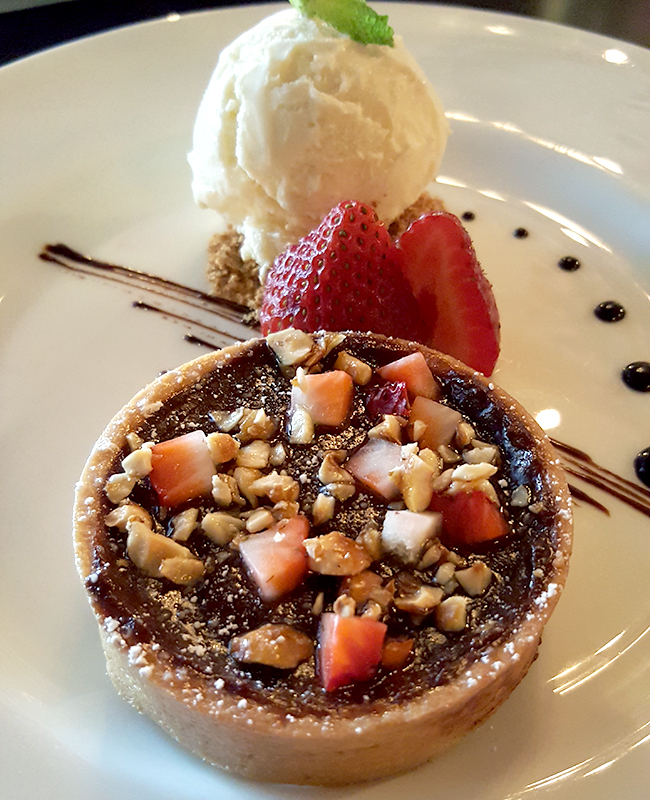