The mere term ‘omakase’ elicits images of fine Japanese establishments with revered masters behind wooden counters determining exactly what experience guests will encounter in that one moment in time. In the Western world, for better or worse, ‘omakase’ has become synonymous with fine Japanese cuisine, though like any other term those in the food industry can throw about carelessly, “fine” is not always the case.

Fortunately for residents of the San Francisco bay area, the simply named Omakase Restaurant is of the finer persuasion. Its proprietors were hoping to achieve the quintessential feel of a Tokyo establishment obviously serious about traditional edo-style sushi, and they’ve done just that even at the risk of alienating guests who don’t quite comprehend that sometimes, the food is indeed the main attraction. Entering the non-descript darkened glass doors to Omakase, we leave all traces of San Francisco behind, enveloped in a light colored wood ambiance, a tall row of bamboo poles along the large window allowing just slithers of sunlight to peek through at an early dinner seating of 5.30 p.m.

The calm, the lack of noise, may be unnerving to a generation accustomed to constant cell phone pings and buzzes or trendy, loud music at the “it” spots du jour but for those of us craving restaurants whose proprietors respect and honor tradition, the craftsmanship of simple, high quality cuisine and who encourage guests to forget about the outside world and simply nourish oneself properly for those two hours, Omakase is a most welcome refuge in a city I fear is becoming dominated by flighty trends and little substance.

Likely boasting the city’s best sake menu, I was thrilled to see the sake being served in chilled pewter pot and cups. This, I had not seen since my years living in Asia. The pewter kept the sake nicely chilled throughout a two hour meal. 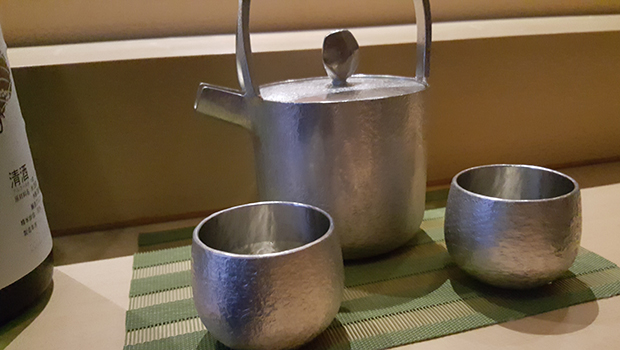 One aspect of dining at Omakase that becomes apparent almost immediately is its incorporation of beautifully hand-crafted drink and plateware, like this other sake cup pictured below. When this amount of detail is taken into consideration for a meal, flowery additions like music are not needed here (and I say this as a lifelong musician). 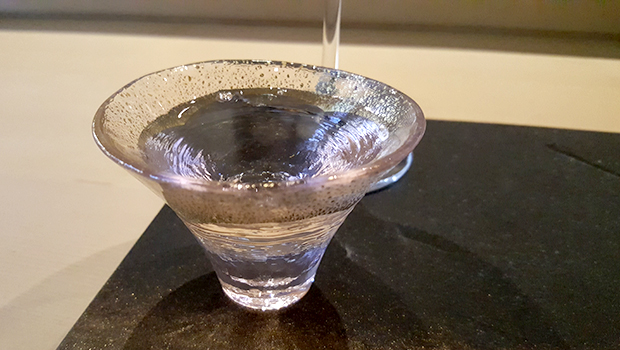 The meal begins with an amuse-bouche of sorts- a small bowl filled with Sake steamed cubes of Yamaimo, otherwise known as Japanese Mountain Potato, resting in a cool, refreshing consommé with with giant clam. The first bite caught me off guard as I wasn’t expecting the combination of the crunchy Yamaimo with the geleé-like consommé as a savory cold dish but it not only worked, it was one of the standouts of the meal. 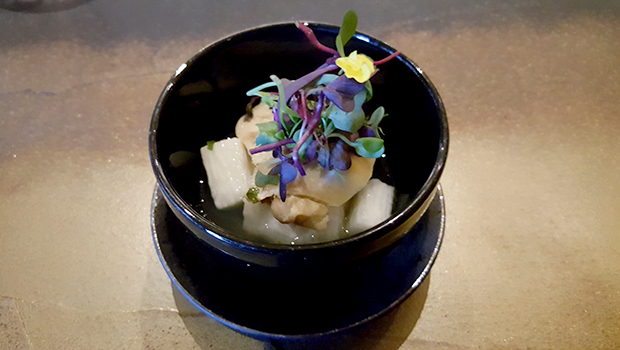 A secondary appetizer comes in the form of a Japanese eggplant piece lightly fried (with zero trace of oiliness; I would not even have realized the eggplant was fried had the Chef not mentioned it) with baby anchovies and just enough shoyu dashi to bathe the two bites perfectly. A touch of microgreens on top lent a vibrant freshness to a robust flavored opener. I would return to Omakase just for this dish alone. 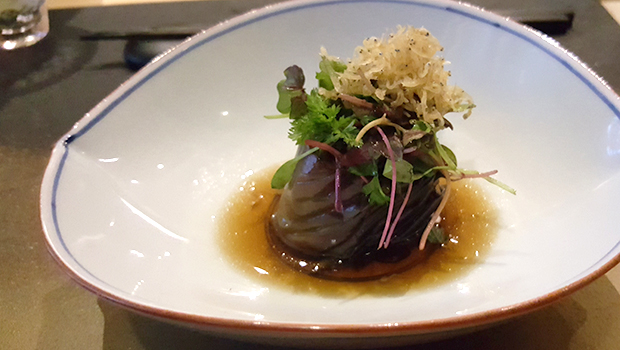 A small dish of Japanese Managatsuo (butterfish) on a bed of asparagus, pickled onions and ponzu jelly brought back memories of evenings at secluded ryokans in the Japanese countryside where highly skilled grandmothers prepare clean-flavored seafood with ultra precision. Aptly named, this butterfish melts on the tongue with barely a bite. 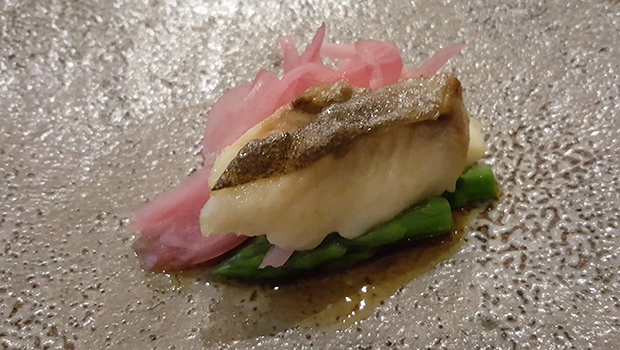 A sashimi duo of Kampachi (amberjack) and Akami (blue-fin tuna) served as a lovely preface to the oncoming parade of nigiri pieces. Omakase flies in fish from world famous Tsukiji Market three times a week, veritably every other day. There is no question by reputation, by sight, smell, taste or texture of the quality of the ingredients used at Omakase. 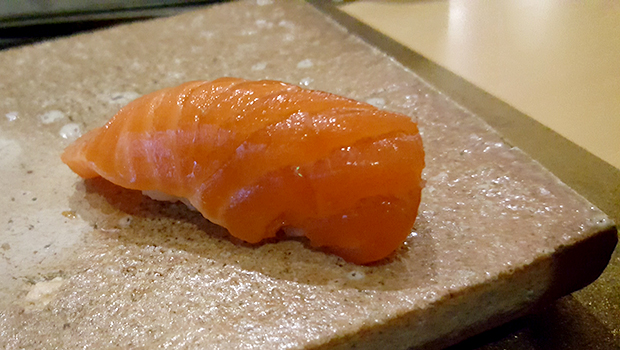 Nigiri included Shima Aji (striped Horse Mackerel), Scallop, Barracuda, Uni, Ocean Trout, Golden Eye Snapper, Halibut, Toro, Chu-Toro and Tamago. Chu-toro is my second favorite cut of tuna, second only to Otoro, and is all around one of my favorite pieces of fish bar none. At Omakase, Chef Jackson lightly torches the fish which yields a pleasant though unnecessary roasted flavor to this prized fish. The parade of nigiri already demonstrates Chef Jackson’s command over the art. I would love to see him highlighting the pure flavors of Chu-Toro and Otoro without the embellishments. The quality of his ingredients, his skills and the sushi rice are enough to create mouthgasm inducing morsels.

Omakase’s Tamago deserves special mention as it is the only one of its kind in the San Francisco bay area. With a texture more like infamous Japanese sponge cakes than the Japanese American Tamago, Omakase’s version is fluffy, light, gently sweet and salty; it is egg in another realm. Served on its own, it was snuck into the end of the Nigiri parade, almost a cheeky manner of teasing our palate as if to say “you thought it was over but here I am, the star of the parade.” 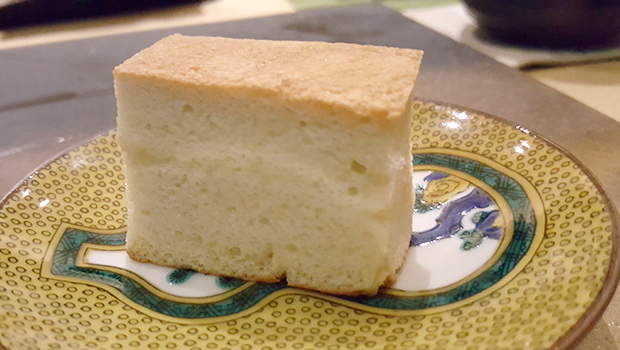 And so it was with the entire meal which felt part Kaiseki- a strong opening with standout dishes reminiscent of countryside Japan, a steady parade of sashimi and nigiri that grew stronger with time, surprising with the unique Tamago and continuing with the Tome-wan, a gorgeous Red Miso Soup with lobster and Nameko mushroom (another personal favorite). Even a “simple” dish like this was thoughtfully served in a cast-iron type ensemble where the hot soup was housed in a vessel with a spout, to be poured into a smaller sipping cup to allow for quicker cooling and enjoyable sipping.

It is not just the food itself but the act of being present in the moment, being grateful for the nourishment and the artistry.

The end, always too soon in a soulful restaurant like this, presented a Strawberry Mochi. And no, this is unlike the imitation nonsense you can purchase at Asian grocery stores. This is the original kind of perfectly chewy yet soft mochi that masters in Japan slave decades over to perfect. A sensual burst of macerated ripe strawberries and a cool gelée atop made for a delicately sweet finish to a serene meal. This mochi, like a few other standouts, is enough to draw me back over and over again.

Service is friendlier and warmer than most Japanese eateries in the bay area and it’s a bonus to see the staff dressed in lovely kimonos instead of the typical black and white garb that seems to be the norm across the area.

Two Omakase choices available here, the smaller at $150/person and the more elaborate at $200/person. Sake pairings at $80/person. Reservations highly recommended as Omakase is a 16 seat restaurant and filled to capacity even on weekday evenings. 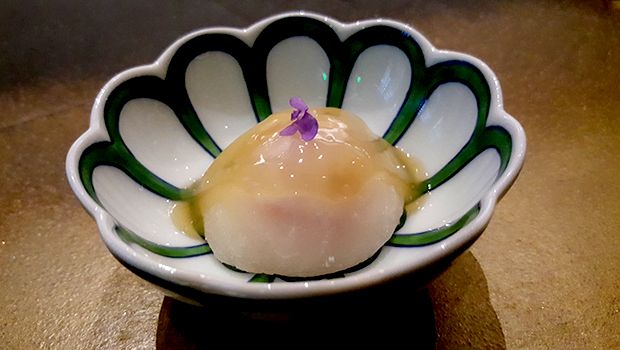 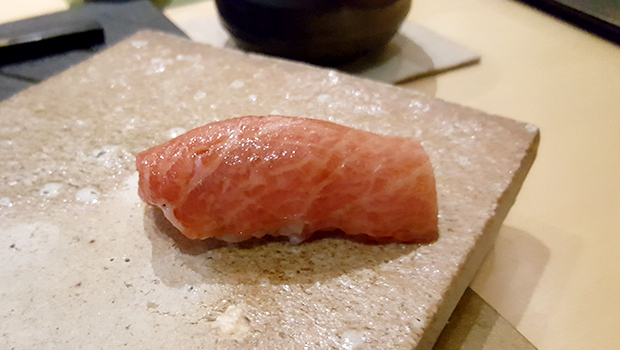 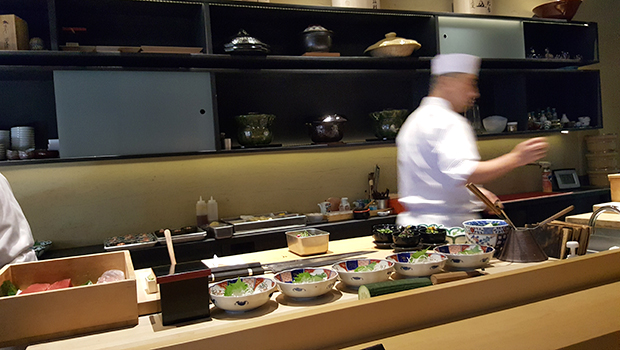 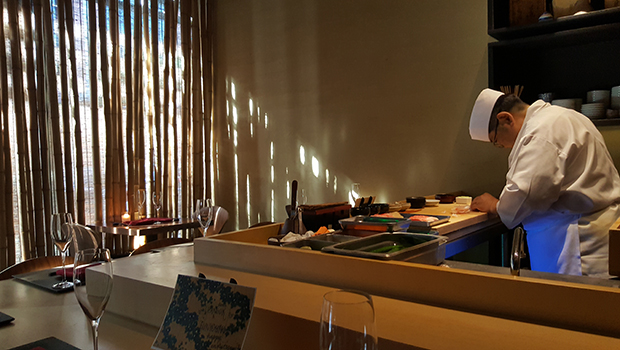