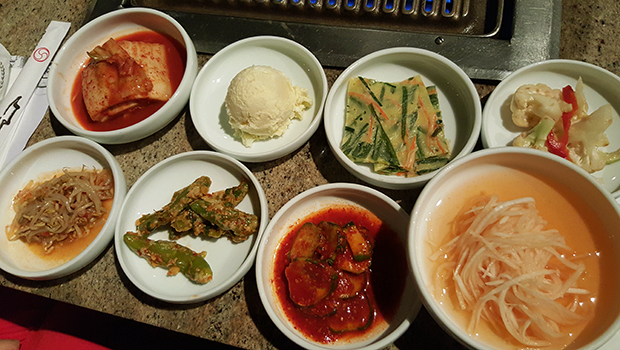 It’s a well known fact that America’s best Korean restaurants rest in the greater Los Angeles area, where a large Korean population exists. How then do we decipher what’s real and what passes as third or fourth generation recipes, catering to a more American palate rather than what’s closest to home? Trial and error is one logical way; another is to ask first generation Korean immigrants where they go to eat when they’re lazy to cook at home.

The first thing that struck me upon entering Chosun Galbee was the grey silver tones of the outside dining area, surrounded by bits of greenery with a cool breeze filtering through. Unable to see or hear any part of bustling Olympic Avenue from where I sat, I listened to the few Korean conversations going on about me and suddenly felt like I was back in Seoul. A friendly ahjumma immediately brought hot Korean tea and ice water to our table, speaking English with a thick Korean accent, much to my pleasure.

Before our orders arrived, she brought a plethora of banchan, (side dishes) enough to cover half of our large table. Cool, fresh kale seasoned with soy sauce and sesame oil was surprisingly addictive, along with the usual suspects of spicy kimchi, savory bean sprouts, tofu, spicy radish, sweet potatoes, chap jae and others. To accompany our Spicy Grilled Pork, Kalbi Jim and Spicy Cold Noodles, we ordered a side of the lettuce with garlic and spicy bean paste.

It was the first time outside of Korea that I had had grilled meat at the table in an outdoor setting, encouraging the complete enjoyment of that familiar sweet bbq scent without the overwhelming smokiness. The lovely ahjumma returned diligently to turn over the pork on the table grill, ensuring a perfectly even cook-through with slight charring. Unlike in many other Korean American restaurants, this pork turned out beautifully seasoned, tender to the bite and deliciously smoky. Paired with the fresh lettuce, garlic and spicy bean paste, all I had to do was close my eyes to hear the sounds of Seoul around me.

One bite into the Kalbi Jim confirmed that these Koreans knew what they were doing. The sweet meat fell apart instantly, imparting a distinctive savory flavor. Spicy cold noodles were how I remember back in Korea- the perfect blend of hot red pepper paste, saltiness and that very firm texture distinctive of Korean potato noodles that I can’t get enough of.

Finishing the incredibly satisfying meal with a complimentary cup of cold, sweet Korean tea, I fully understood why Chosun Galbee was popular amongst both Koreans and the trendy, well traveled movers and shakers of LA. This was as good as it was going to get outside of Korea. Within the stone walls, green bamboo plants and the friendly service of the ahjummas, the spirit of Seoul lives firmly in Chosun Galbee’s well executed cuisine. 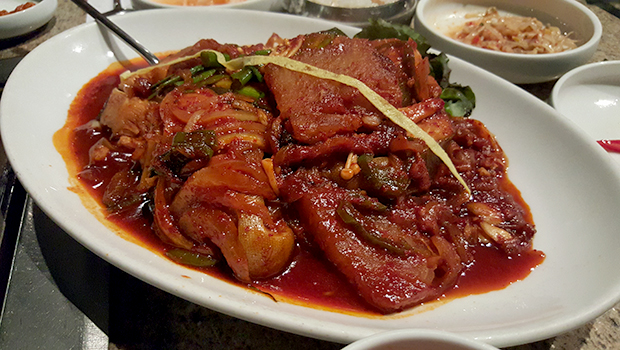 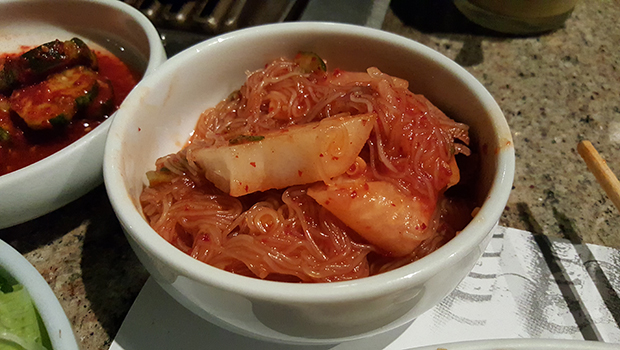